#EuropeOnward. Bridging the EU Council presidencies: from Bucharest to Berlin 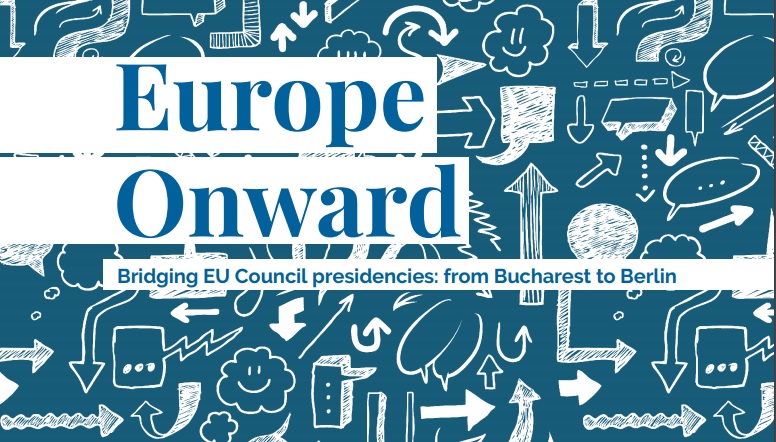 As a new European Commission is in the making in Brussels, #EuropeOnward is a series of implementable policy proposals for the incoming EU leadership, providing new impetus for the Union’s strategic priorities.

GlobalFocus Center, the German Council on Foreign Relations (DGAP) and the Romanian EU Council Presidency (first half of 2019) convened in June 2019 in Bucharest a high-level group of knowledgeable experts from top think-tanks across the EU and initiated a platform for dialogue between the expert community and decision-makers. This format seeks to support the unblocking of the current stalemate in various policy fields, generated by divergences among member states.

The kick-off event, our seminar “Bridging EU Council presidencies – from Bucharest to Berlin” took stock of the previous Sibiu Summit on the Future of Europe and the results of elections to the European Parliament. Its proceedings brought fresh and concise input to seven policy memos cooperatively authored by the participants and reflecting the variety of views within the EU in a balanced fashion.

These address crucial areas of EU policy, from the Union’s place in a changing global order, to the future of enlargement, migration, hybrid threats and living in a post-truth world, from dealing with an economy in flux and completion of the single market to regaining the trust of European citizens.

The project benefited from the generous support of the Black Sea Trust of the German Marshall Fund, which is gratefully acknowledged.