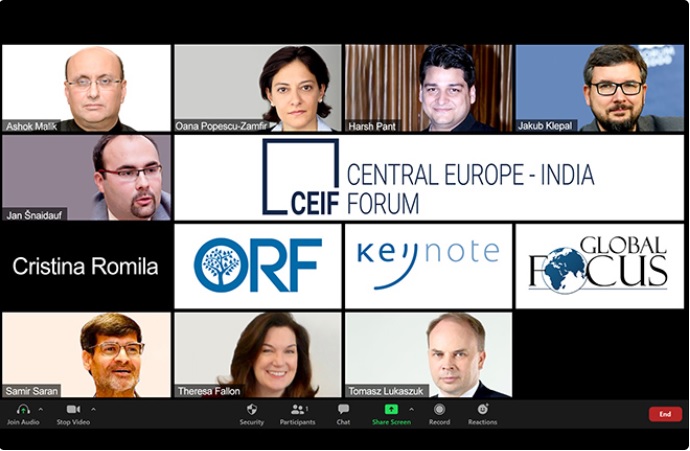 With the coronavirus pandemic revealing the indisposed nature of the erstwhile stewards of the world order, middle powers are set to emerge as key determinants of the future of liberal economic interdependence. Undergirded with shared values and congruent economic systems, India and Central Europe hone a considerable degree of natural convergences.

In the coming times of increased protectionism and suspicion towards global commerce, India-Central Europe partnership can thus play a pivotal role in purporting a new interdependence model — which would thrive on identified complementarities and not towards exacting competitive leverages.

In this spirit, a virtual pre-event to the Central Europe-India Forum (CEIF) was organised on June 16, 2020. Developed, led, and organised by the Observer Research Foundation (India), KEYNOTE (Czech Republic), and the GlobalFocus Center (Romania), the online meet sought to outline natural convergences despite nascent challenges posed by the coronavirus pandemic. The discussion occurred in line with CEIF’s aim to enhance “the mutual flow of information and knowledge in the fields of research and technology, business and trade, civil society, politics and security between India and Central Europe and to contribute to strong and diverse relations among the represented countries including promoting cooperation, creating and fostering sustainable networks, and identifying new opportunities.”

In the post-Cold War timeline, India continued to mostly adhere to its reticent non-alignment policy’s idea of ‘strategic autonomy’. However, in gradually ramping engagement with the estranged West, India’s early independence-era ties with Central Europe stood short-changed. Although New Delhi acknowledged the dramatic transformation that the Central European nations were undergoing, as one panellist in the discussion pointed out: Apart from the US, India’s “prime frame of reference” with respect to ‘the West’ has solely been Western Europe.

This has been most evident with the absence of an integrative approach towards the subregion as in case of New Delhi’s outreach to the subregion of Northern Europe. Prime Minister Narendra Modi’s 2018 visit to Sweden for instance, encompassed the India-Nordic Summit — with prime ministerial representations from Finland, Norway, Denmark, and Iceland. Thus, External Affair Minister S. Jaishankar’s 2019 visit to Hungary and Poland came amidst calls for increased Indian engagement with the subregion.

From the economic standpoint, an approach towards Central Europe is usually centred on the Visegrád Four (V4) nations, given their emergence amongst the fast-growing economies in the European Union. However, the wider Central and Eastern European (CEE) subregion encompasses other potential partners like Austria, Croatia, Serbia, Slovenia, Romania, Ukraine and even the Baltic states or in other words more than 100 million people. An outreach to this wider cluster of nations can lend a strategic bent to India’s approach to the CEE.

Areas of possible cooperation can spread from technology in various aspects, IT, connectivity, cyber-security, through e-mobility, to crisis management and healthcare and medical supplies.

Exploring partnership avenues with Central European powers can be instrumental towards India’s own burgeoning energy needs (set to double over the next decade) and its challenge of shedding dependency on coal.

The criticality of this subregion is also evident from the standpoint of connectivity projects. The Central and Eastern European subregion is crucial to the EU’s pan-European project of creating a “network of railway lines, roads, inland waterways, maritime shipping routes, ports, airports and railroad terminals.” With its Trans-European Transport Network (TEN-T) undertaking, Brussels is seeking to “strengthen social, economic and territorial cohesion”. With India’s own multi-mode project of the International North-South Transport Corridor (INSTC) into the Baltics, CEE subregion could be the prime logistical and political facilitator over identifying complementarities between the two mega projects.

Just as India mostly perceived ‘the West’ as Western Europe, Central Europe has for a long time had a limited view on ‘Asia’ as being limited to China. However, in recent decades, the perception has shifted and India is being considered as a strong middle power with opportunities not yet fully discovered. For instance, the discussed assistance for India to reduce its dependency on coal, presents complementaries for CEE nations even beyond their expertise in nuclear energy, handling radioactive waste and development of new generation reactors.

Latent avenues could include waste-to-energy projects, harnessing non-traditional clean sources, employment of photovoltaic systems, deployment of energy storage mechanisms with minimal waste, and other avenues of the circular economy. An impetus to cooperation in these avenues can prove to be of pivotal significance in achieving the declared US$ 10 trillion goal for India-CEE bilateral trade.

Furthermore, as one of the world’s top arms importers, India can be a prime destination for CEE defence manufacturers. The potentialities of India’s ties with Czech Republic in this domain have already been touted. During Indian President Ram Nath Kovind’s 2018 visit to the country for instance, the two sides signed MoUs between “the Council of Scientific and Industrial Research, India and the Czech Academy of Sciences; on work plan for support of Indo-Czech projects in diverse areas of science and technology; on visa waiver agreement for diplomatic passport holders and between ELI Beamlines and Tata Institute of Fundamental Research in the field of Laser Technology.” CEE defence manufacturers can further tap into India’s burgeoning arms market, given recent developments over New Delhi’s attempt to reduce dependency on Russian arms and diversify sources beyond the US in view of Trump’s transactional conduct.

In addition, India is a great power in the ICT sector, and hence scope for cooperation also persists with respect to e-commerce logistics, cyber-security, and specialised software for hospitals and smart cities. Moreover, apart from the prominent presence of Indian IT firms like Infosys, TCS, WIPRO, HCL in the region, CEE nations can also benefit from Indian best-practises on automatization and digitization of state administration, ‘smart’ public transport, waste management, and energy consumption.

Finally, although India and CEE nations already boast of cooperation in the health space (esp. with substantial presence of India’s SunPharma and Dr. Reddy’s Labs in Romania), the coronavirus pandemic has highlighted the world’s over-dependency on China for medical supplies. Given India’s recent efforts to emerge as a self-reliant consumer and exporter of Active Pharmaceutical Ingredients (APIs), CEE nations can consider India as an alternate, credible source of APIs and reduce their dependence on China.

Hence, even in face of the emergent anti-globalist sentiment in the post-COVID19 timeline,  the many unrealised convergences between India and Central Europe can be pivotal in instituting a rare dynamic based on identified complementarities — and not towards exacting competitive leverages.

Libuse Sovadinova is a Project Coordinator at the KEYNOTE

Kashish Parpiani is a Research Fellow at the Observer Research Foundation